Skip to primary navigation Skip to content Skip to footer

WBA is owned by Garrett and Kaia Kababik. In 2010 they met while Paddleboardingalong the Santa Barbara coast and sharing stories about the various ocean projects they were involved in. Kaia is one of the founders of Save the Mermaids, a local non-profit that teaches children about ocean pollution and ways to reduce it. Garrett had just co-founded Channel Islands Outfitters (CIO) after returning from a thru-hike on the Appalachian Trail in 2009, and he had committed his new focus to help protect and save the oceans through the adventures he led at the Channel Islands National Park..

Over the decade, Kaia and Save the Mermaids was instrumental in getting plastic bags banned from Santa Barbara and surrounding Counties. In 2013 CIO became the first service based Benefit Corporation in the world and was awarded Best for the World and Best for the Community honors in 2013 and 2015 respectively.

Everything changed in 2017 when CIO was outbid for the Scorpion concession contract with the National Park Service. 26 years of experience was instantly split up and everyone’s plans had to change. Many of the CIO guides went to work for the new company while Garrett and Kaia took the chance to explore a new island in the Pacific, Hawaii.

After living, farming, and ranching on the Hamakua coast for 2 years, the temperate waters of the Santa Barbara Channel called and they returned, this time to Anacapa Island. Over the years, Anacapa Island had been their favorite to kayak and explore the protected wilderness of, but the challenge was always getting there. The solution was waiting for them in the Channel Islands Harbor… the Sunfish.

The Sunfish has a long history of taking people to the Channel Islands and in 2005 Andy Volaski rebuilt her for her newest adventure… kayaking and diving! She was finished with overhead kayak racks and a swim platform designed perfectly for launching and loading from the water without large climbs down ladders and steps. She was the perfect adventure shuttle! So in 2019 Kaia and Garrett embarked on this newest adventure and named it Wild Blue Adventures in tribute to the wilderness of the Marine Sanctuaries that surround much of Anacapa Island. These Wild Blue areas are some of the only protected ocean wilderness areas on the planet, and protecting more of these would be the next project. Now in 2020 they Winter on the slopes of Mauna Kea in native forest on the Big Island of Hawaii with their son Torin where they host educational retreats promoting healthy forests and highland ecosystems. 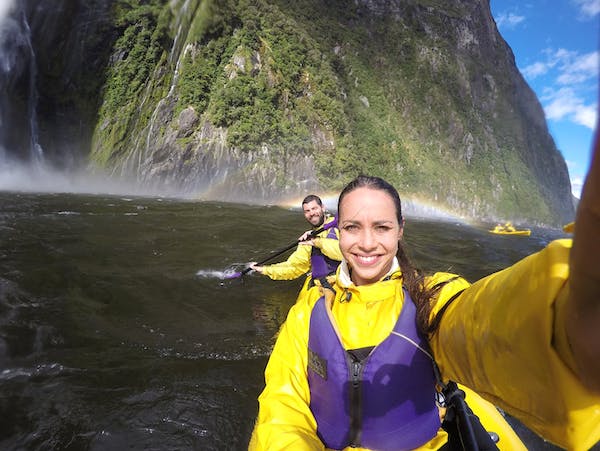 It is our mission to get people of all ages connected to ocean wilderness areas through unique and memorable experiences in hopes of establishing an adoration and respect that lasts for generations and extends to the future protection of more ocean wilderness.

Wilderness on land has been a powerful and important project of presidents, organizations, and individuals for centuries. However, preservation of ocean areas has been widely overlooked until recently due to the vast area the oceans cover and the lack of global consensus on how to manage them. We cannot allow this to be the reason our children are left a barren “fishless” ocean.

Yet in a 2018 global study of the ocean revealed that no area of the ocean was untouched by humans and only 13% of it was considered “wilderness”.“When I began working at the Channel Islands in 2001, work was being done to establish an island “Marine Protected Area”. These would be areas that were closed to all fishing, commercial, and recreation. Over the past 15 years I have seen what can happen in an area that is protected, essentially an ocean wilderness. I can say, without a doubt, these areas are more biologically diverse than the surrounding areas, but what is most incredible is how the areas outside of the “wilderness” areas also rebound with diversity and abundance.” Garrett Kababik WBA Owner/Guide

We are fortunate to be able to operate in an ocean wilderness area. Protected for 40 years, North Anacapa Island is one of the most amazing places to paddle and dive because of this protection.

Ways you can help